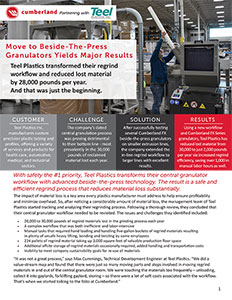 Looking to minimize the regrind touch points, Teel Plastics management consulted with Cumberland about their current challenges and the possibility of using beside-the-press (BTP) granulators. After an onsite analysis, they decided on a test that would feature Cumberland BTP granulators on one of their smaller lines.

The new workflow would allow scrap to be taken directly from the end of the line as it was produced, reground and transported via an evacuation system to the front of the line where it is discharged to a gaylord positioned next to the extruder. As soon as the gaylord was full, it could easily be move over a mere five feet to start using right on the line. This immediately eliminated several labor- and time-intensive steps and allowed more potentially scrap material to be used, cutting down on overall process waste. The company then decided to reconfigure six more lines using a similar BTP workflow for a total of seven.

Delivering the right Cumberland part for your application.

This website uses cookies to improve your experience while you navigate through the website. Out of these cookies, the cookies that are categorized as necessary are stored on your browser as they are essential for the working of basic functionalities of the website. We also use third-party cookies that help us analyze and understand how you use this website. These cookies will be stored in your browser only with your consent. You also have the option to opt-out of these cookies. But opting out of some of these cookies may have an effect on your browsing experience.
Necessary Always Enabled
Necessary cookies are absolutely essential for the website to function properly. This category only includes cookies that ensures basic functionalities and security features of the website. These cookies do not store any personal information.
Non-necessary
Any cookies that may not be particularly necessary for the website to function and is used specifically to collect user personal data via analytics, ads, other embedded contents are termed as non-necessary cookies. It is mandatory to procure user consent prior to running these cookies on your website.
SAVE & ACCEPT